Teresa Plancarte sat on her living room couch on a fall Saturday evening, marveling at the St. Helena vineyards and the pines just outside her front door. And she thought, “My God, nature is so beautiful.”

Nearly 24 hours later, at 3 a.m., Plancarte, her husband, Esiquio, and her 34-year-old special-needs son, Rogelio, were awakened by sirens and megaphones warning them to evacuate. A wildfire was approaching.

Plancarte, 66, grabbed what she could before the family left their home and sought refuge with their other son, Adrian, and his family in Napa. She took with her important documents as well as four pairs of pants and three shirts for Rogelio.

This year has been very hard for us, but Rogelio helps us to smile again and keep living…

That next evening, officials called to notify her that their home and all of their belongings had been completely burned in the Glass Fire, which eventually scorched 67,484 acres and destroyed 1,555 buildings in late September.

“It’s very difficult,” Plancarte said, recalling her visit to the burned site weeks later. “Everything was gone. The memories were gone, everything.” 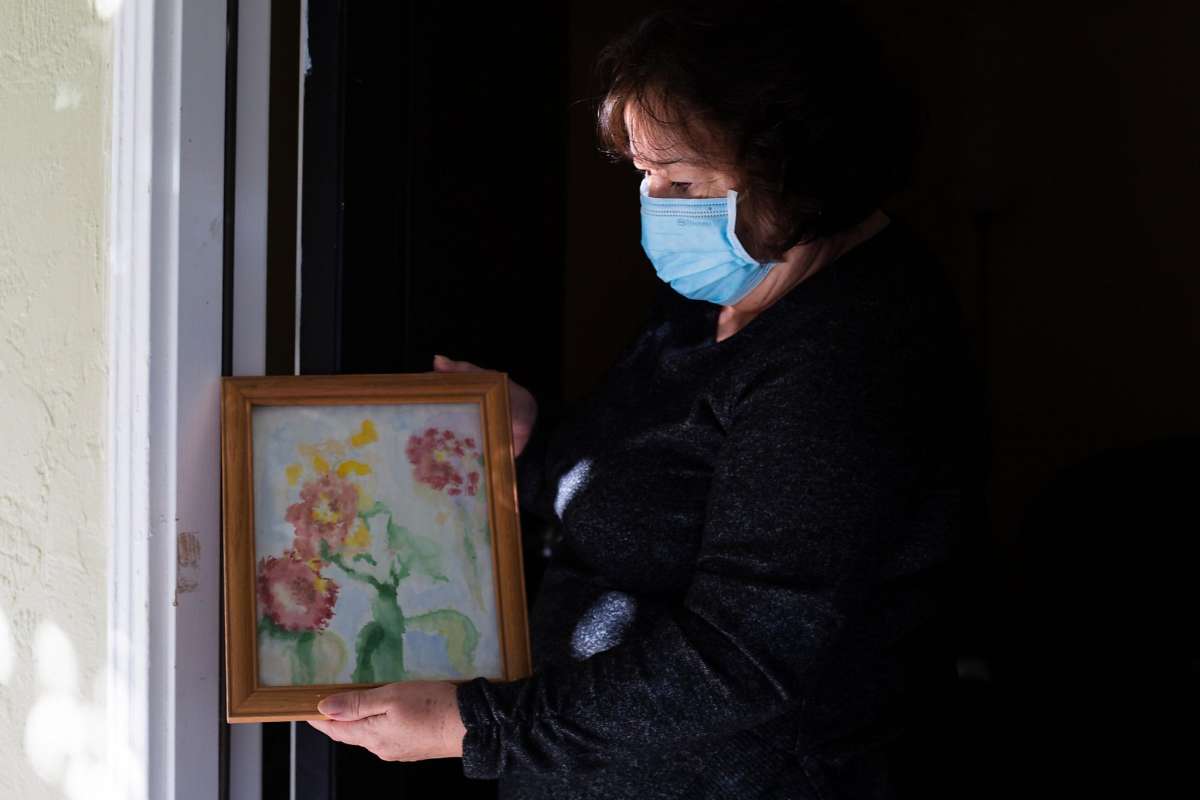 Teresa Plancarte holds one of Rogelio’s first watercolors he did when they lived in their home of 35 years. The Plancarte family lost its home to the Glass Fire but was able to grab some belongings before evacuating. Photo: Nina Riggio / Special to The Chronicle

Plancarte knew her family needed their own space where Rogelio was comfortable and free to listen to music, and where she could tend to plants, which she loved doing. It was a stark contrast from the spacious ranch in St. Helena, where they had lived for 35 years while exchanging housekeeping duties for rent.

The property owner assured Plancarte that the house was covered by insurance and that the family could move back in once it was rebuilt.

But with the chaos of fires and the pandemic, the two were unable to get in touch until recently.

Teresa, Esiquio and Rogelio stayed with her other son for nearly two months. Though Adrian told Plancarte to feel at home, she began to feel as though she were imposing, especially when she tended to Rogelio in the middle of the night or had to calm him down when her other son’s children startled him.

Plancarte, out of work after the fire, received disability aid for her son, and her husband, who worked in the fields most of his life, received retirement benefits, but she knew that they would not be able to afford an apartment on their own.

She visited the newly created local assistance center in Napa hoping to meet with someone from the Federal Emergency Management Agency and find other resources to help her family. There, she met Alejandra Gloria, a Napa County coordinator for the Chronicle Season of Sharing Fund, which works year-round to prevent homelessness and hunger in the nine counties of the Bay Area.

“A lot of people are trying to make ends meet right now. People lost their jobs or their working hours were reduced, and then on top of that, many families were affected by the fires,” Gloria said. “Sometimes they feel like there is nothing out there to help them.”

in November, Plancarte found a two-bedroom apartment in Napa, and the Season of Sharing helped pay for the deposit and first month of rent.

“She was really lucky to find an apartment,” Gloria said. “Not a lot of housing is available with all the people who lost their homes.”

Plancarte said she is grateful for the aid in finding a temporary home.

“I am thankful for the care Season of Sharing gave us, and we are very glad to have found a place to stay,” Plancarte said.

But the expenses will continue to increase as she replaces essential items, such as silverware, blankets and clothing for the cold weather. The Plancartes do not have beds, so they have been sleeping on inflatable mattresses. She has been buying these items on credit and worries she will fall into debt.

She said the county is providing them with mental health resources, and social workers are teaching Rogelio how to become more independent and learn how to navigate the city on bus. When the family becomes more stable, Plancarte hopes to find a larger home.

“This year has been very hard for us, but Rogelio helps us to smile again and keep living,” she said. “He sees us sad and he asks, ‘Are you mad? What’s wrong?’ and he just has us laughing.”

Read the full article at: https://www.sfchronicle.com/bayarea/article/Season-of-Sharing-helps-St-Helena-family-in-the-15828828.php