For Russlyn Nicolas, a single mother battling metastatic breast cancer, the coronavirus has made her difficult life even tougher.

Due to the pandemic, she lost her job in early March and both daughters who live with her also lost their jobs. A roommate who had been contributing toward the rent moved out. Their income plummeted by $3,000 a month.

“The landlord told me he still has the mortgage to pay, and I can’t defer the rent forever,” she said.

Not having enough for the rent was only one ripple in the sea of troubles that found its way to the single-story home in west Antioch that she shares with her 80-year-old mother and two of her four children.

On top of her financial and health troubles, she is caring for her mother, who over the past months has developed early-stage dementia.

I don’t have the luxury of wondering how I’m going to manage, I have to manage. Sure I’m worried but at the same time you have to keep things going.

The Chronicle Season of Sharing Fund stepped up to cover part of April rent and all of May rent. 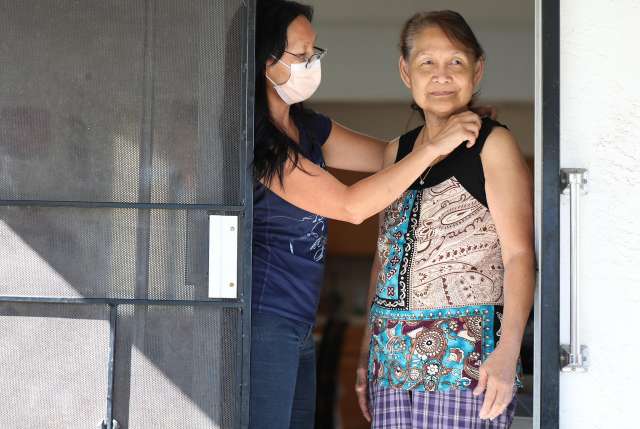 Russlyn Nicolas shares her single-story home in west Antioch with two of her four children Not having enough for the rent was only one ripple in the sea of troubles that found its way to the single-story home in west Antioch that she shares with her 80-year-old mother and two of her four children. Photo: Liz Hafalia / The Chronicle

The fund, which provides temporary assistance to people in need, is well known as a holiday season staple in the Bay Area. During the pandemic and accompanying economic crisis, the fund has expedited the release of fundsto help with housing and other critical issues caused by the coronavirus and shelter-in-place orders.

Daily life, said Nicolas, is like juggling a lot of balls and not dropping any.

Her mother can no longer be left alone, because she does things like leave the stove on.

On the days when Nicolas goes to the hospital for her chemotherapy treatments or her radiation treatments or her MRIs, someone has to stay home with mom to make sure things stay turned off. Now that her children are able to be left alone at home, she said, her mother isn’t.

Nicolas gets disability insurance payments but they don’t cover everything. The younger daughter is looking for work to replace the babysitting gig, but hasn’t found it. Her older daughter was supposed to get unemployment checks but they got held up.

But the first of the month, when the rent comes due, never gets held up.

Meanwhile, no new roommate has come along to help cover the rent. CalFresh food assistance only goes so far. The pandemic keeps Nicolas and her two daughters from digging themselves out from the hole, which keeps growing deeper.

“I don’t have the luxury of wondering how I’m going to manage,” she said. “I have to manage. Sure I’m worried but at the same time you have to keep things going.”

Social worker Claude Battaglia, who has been overseeing the family’s plight on behalf of Independent Living Resources of Antioch, said Nicolas was deserving of a little extra help.

“She’s a hard worker and a good person who found herself in an unfortunate situation,” Battaglia said. “That grant really did her a world of good and everyone is so grateful that she received it.”

With the rent settled up, Nicolas has seen things turn around. Alison’s unemployment checks began arriving, some friends and her church pitched in, Battaglia put Nicolas in touch with a food bank and she got a tenuous handle on her expenses. The family is no longer underwater; it’s back to treading water. That’s a big improvement, she said.

“Oh, my goodness, that money from the Season of Sharing Fund was so important to us,” Nicolas said. “I don’t know what we would have done without it. We were running out of hope. God bless Season of Sharing.”

Read the full article at: https://www.sfchronicle.com/bayarea/article/Antioch-family-battling-cancer-dementia-and-15468292.php