Burned out of their apartment by a huge fire, family finds home just in time for holidays

At first, it just seemed like someone was barbecuing next door. Adrianna Wolfe was still wondering what that bacon-like smell was when she walked into the living room and noticed a haze. Then the TV stopped working. It didn’t stay a mystery for long.

“It was smoke — the place was on fire!” Wolfe said, eyes widening at the memory. “I grabbed the kids and ran. I was barefoot, couldn’t even save my purse. We barely made it out alive.”

That was on the morning of April 27, and by the end of the day the apartment complex Wolfe and her three children had called home in Millbrae for 10 years was an ashen husk. Life became a cramped hunker-down in emergency government-funded motels. With the coronavirus eliminating her job as a special education instructor, Wolfe was becoming desperate, dwindling savings being chewed up even after help from food pantries.

“My 6-year-old son kept asking when were we going home, and it was very confusing to tell him we couldn’t go back,” Wolfe, 34, said. “It was all so hard. I had to find a new place to live, but where? It kept feeling like it was hopeless.” Wolfe’s boyfriend, Javier Ramirez, also displaced in the fire with his mother in a different apartment, pitched in on the hunt — but to no avail.

Finally the single mom got three heaping helpings of good luck. One was Samaritan House case manager Robyn Fischer. Another was a property manager named Dennis Sanchez. And the third was the Chronicle Season of Sharing Fund.

“Adrianna’s predicament broke my heart,” said Fischer, whose nonprofit helps low-income and homeless people with housing, food and other needs in San Mateo County. “Here she was a single mom, fighting to find something to rent before it was too late. She had a housing rental voucher and had to use it on a new place soon or lose it — she had to find something. We started really working hard on it.” 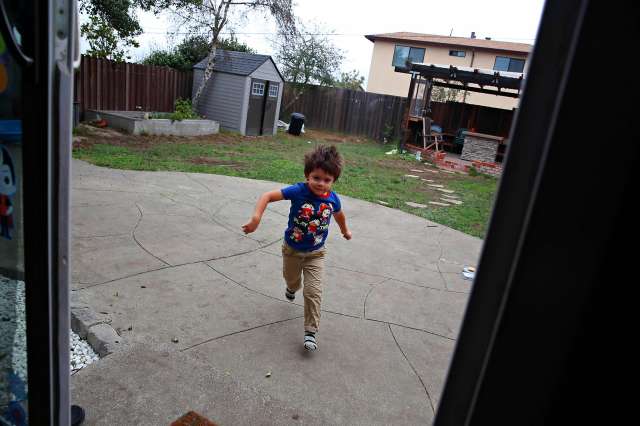 Giovanni Ramirez-Wolfe, 3, runs in his backyard towards his house at his new home on Friday, November 13, 2020 in Pacifica, Calif. Adrianna Wolfe, mother of Ramirez-Wolfe, and her three young children were burned out of their home in a Millbrae apartment in April. They were staying in a hotel until Season of Sharing paid the security deposit to get them into a new home in Pacifica in June. Photos by Lea Suzuki / The Chronicle

Fischer and Wolfe scoured everywhere, but housing at a time of coronavirus is unusually tight with everyone staying put if they can to ride out the plague. Then Wolfe happened upon a listing online by Sanchez — a three-bedroom bungalow in Pacifica that just popped up for rent, much bigger than her destroyed apartment but within her low price range.

He had unusual motivation to listen.

“They were super stressed and said they wanted a spot really bad,” said Sanchez. “You get a call like that, and sometimes you don’t know if it’s a scam — but something told me this one was OK. I met with the family and they were really nice. Then when they told me about what happened, I was really pulling for them.”

It turned out Sanchez’s own family had been burned out of their Davis home years ago. He knew the pain. The desperation. The need.

“That kind of thing is truly traumatizing, so when I realized I could get them into this rental, I was really pumped,” Sanchez said. “They’ve been a really good fit.”

Before they could move in, though, Wolfe needed to pony up a security deposit. She didn’t have the cash. So to cover the cost, Fischer turned to Season of Sharing, which works year-round to prevent homelessness and hunger in the nine-county Bay Area. All donations go directly to help people in need, with all administrative costs covered by The Chronicle and the Walter and Evelyn Haas Jr. Fund.

In June, the family moved into their new home. And this month, the joy of having what seems like a palace compared to their old two-bedroom apartment by a noisy train track practically radiated through the rooms.

Twelve-year-old Elina has her own room at last, with a table where she can set up her treasured makeup kits. Her brothers Leonardo, 6, and Giovanni, 3, have big beds and a desk, with Captain America and Hulk posters on the wall. The house is filled with furniture donated by nonprofits and individuals to them and the 10 other families burned out of the three-story apartment complex.

And out back is a wonder they never had before in the kids’ lives — a yard with grass and room to run and play and toss toys. Mom planted a garden of tomatoes, zucchini, squash and lacy green chamomile. There’s a sitting area with chairs and a little table to catch some fresh air. The whole neighborhood, a placid stretch of similar suburban houses, is so quiet it’s almost eerie at times to ears used to noise.

For now, Wolfe is getting by on government assistance until her work comes back online. And eventually, after the coronavirus ebbs, she wants to study to be a counselor — to help people dealing with crises like what she and her children just endured.

“At first when I was looking for a new place, I didn’t mention the fire because I didn’t want someone to feel sorry for me, or pity me,” Wolfe said. “And I did get denied to a lot of other homes, so I was losing hope.

“But then Dennis asked me why I left my last place, and when I finally told him, it was like magic. He’d gone through the same kind of thing. He understood. It was like we were being watched over.”

She was sitting in the dining room of her new home, and looked over to the walls next to the corner table. One wall held a huge painting of Mother Mary. The other had a similarly huge painting of the Last Supper, with a sign reading, “Bless Our Home” over it, and crosses flanking each side.

“Those two paintings are the only things left after the fire,” Wolfe said quietly. “They were watching over us. Our prayers were answered.”

The lucky break didn’t really sink in until the day she and the kids moved in.

“The whole experience was like a dream,” she said. “I didn’t believe it was real until I opened the door. And I just fell to my knees with tears of joy and happiness and relief. Finally somebody gave us a home to call our own.”

This Thanksgiving will be the first one the kids will have in a house with a yard they can spill out into. Their new home is much larger than the old apartment, so Wolfe is inviting some of the other families burned out by the same fire.

“We have more space than ever before, and everyone who got burned out — there were about 60 of us altogether — has become even closer since the fire, so we want to share the holidays,” she said.