Now, the engaged couple, who live with Navarrette’s 13-year-old daughter, Serenity, were able to have Mojica’s sister and brother-in-law over to their new San Jose apartment for the holiday dinner. They feasted on turkey birria, a spicy Mexican recipe that Mojica learned to cook from her mother.

“That was a good feeling,” said Navarrette, 30. “We’d always wanted to host family for the holidays.”

It was a meaningful way to close a challenging chapter in the family’s life. After Navarrette was laid off from his job in March due to the pandemic, the family spent several months sleeping in their car, crashing with relatives and crowding into a tiny motel room on a voucher.

But the family is now back on their feet, thanks to San Jose’s Midtown Family Services and a grant from The Chronicle’s Season of Sharing Fund, which works year-round to prevent homelessness and hunger in the Bay Area. Navarrette and Mojica both have new jobs, earning more than they’d been earning before the pandemic, and their one-bedroom apartment now feels like home. A small white Christmas tree in the living room is decked out with ornaments, and framed photographs of family members sit below the television. Next to the kitchen counter, Navarrette, who is a skilled barber, has set up a professional-looking haircutting station, complete with a swiveling salon chair.

Nestled on the couch, a housewarming gift from Navarrette’s mother, are the family cats, Hennessey and Remy. Even with the two animals, the home is immaculate. “I’m an obsessive cleaner,” laughed Mojica.

The problems for this family, as with tens of millions of other Americans, began in March, when Navarrette’s job temporarily shut down. He’d been working as a lead operations specialist for Lime, the electric scooter company, which suspended all scooter rentals when Bay Area counties enacted shelter-in-place orders.

At the time, the family of three was living in a room in a shared apartment. But when their roommate, the master tenant, learned that Navarrette had lost his job and could no longer pay rent, he demanded that they leave. Mojica, 23, was between jobs. While they waited for the first unemployment check to arrive, they had no income. 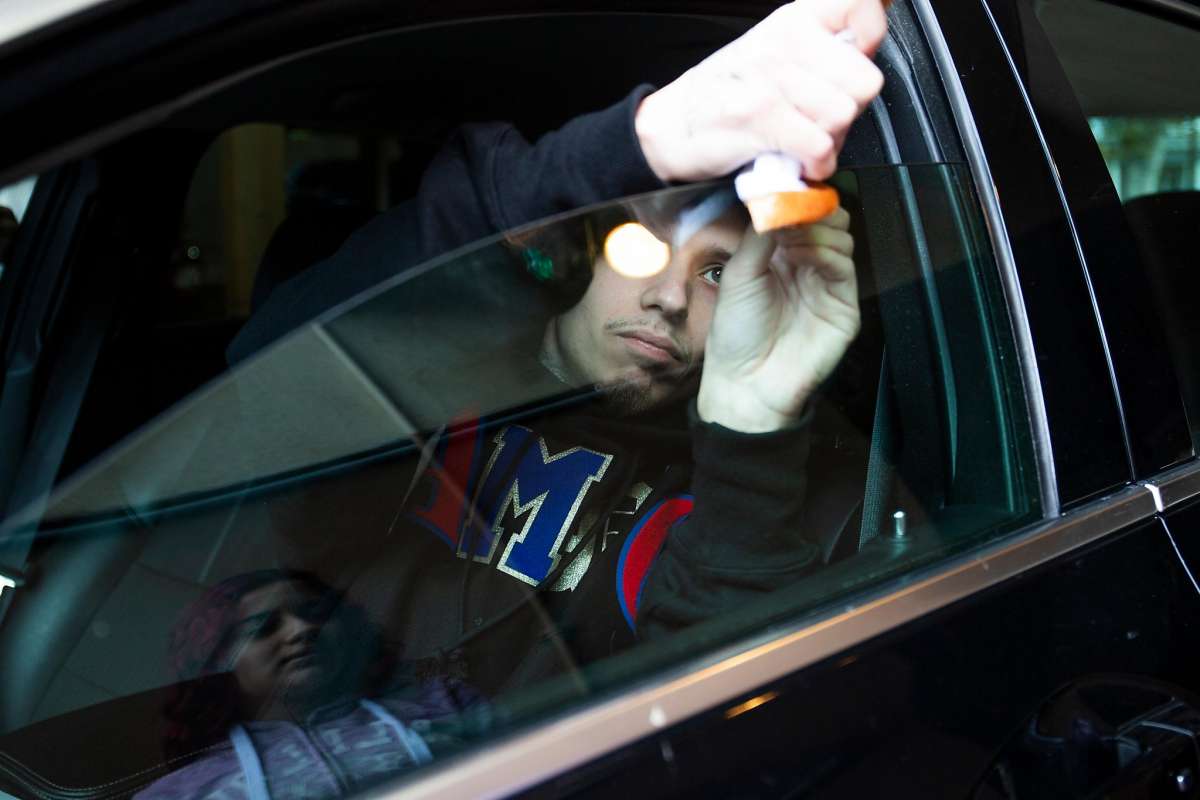 Robert Navarrette, tries to mount “reindeer antlers” on his Chevy Impala on December 11, 2020 at the families apartment in San Jose, CA Photo: Nina Riggio / Special to The Chronicle

Navarrette is a stark example of the ways in which coronavirus-related job losses have exacerbated the Bay Area’s homelessness crisis. “The pandemic has brought these issues that we have already been facing to light,” said Denisse Herrera, who became Navarrette’s caseworker at Midtown Family Services, a nonprofit that supports homeless families and parolees in Santa Clara County. “It has displaced not just the poor but the working class, the blue collar employees.”

After clearing out of their apartment, the family stayed with Mojica’s sister for a few nights. Then, when it was time to leave, they put their belongings in storage, drove to a park and spent the day calling every program whose phone number they could find in hopes of getting some help. They slept in their car until Midtown Family Services connected them with LifeMoves, an organization that provides interim housing assistance for families. They were getting a 90-day voucher for the Motel 6.

Knowing what we’ve been through, I never want to go back to that again…

The voucher was a salvation, but life at the Motel 6 wasn’t easy. “It was very uncommon to be there as a family,” said Mojica. They couldn’t cook their own meals. They were nervous about Serenity leaving their room, where she might see the hotel guests who used drugs in the stairwells. At night sometimes, a group would crowd menacingly around Navarrette’s car in the parking lot, which he interpreted as a threat.

“People didn’t like us because they knew we were trying to better ourselves,” he said.

In July, Lime hired Navarrette back, and in August Mojica got a job at Party City. Slowly, they started to build up cash reserves and used the funds to submit apartment applications. They got several rejections, due to poor credit history.

Then they heard from a friend who had been planning to move into an apartment but decided at the last minute not to — and the landlord wasn’t doing a credit check.

By this point, they were desperate; the time on their Motel 6 voucher was running out. Mojica and Navarrette submitted an application, and the landlord approved it right away. The next day, with just three days left on their voucher, they picked up the keys.

They had enough money to pay the security deposit and the pro-rated rent for the rest of August. But it was the middle of the month, and there was no way they’d be able to pay the full rent for the month of September just two weeks later. The couple were back to the cycle they’d been stuck in during the spring: calling any program whose phone number they could find to ask for assistance.

From the first time I spoke to Robert, I had no doubt that he and his family were going to come out on top,” said Herrera. “There was just such determination.

That’s when Herrera stepped in again. With money from the Season of Sharing Fund, she helped Navarrette and Mojica secure rent for the month of September.

His case stood out to Herrera because his status as a single father with full custody is unusual among her clients. In a situation where some people might be despondent, Navarrette remained calm, resolved and hopeful that he would soon be able to find a stable home for Serenity, Herrera said.

“From the first time I spoke to Robert, I had no doubt that he and his family were going to come out on top,” said Herrera. “There was just such determination.”

They moved in just in time for Serenity to start the academic year — albeit at a distance, since her school has not resumed in-person learning. On her school-provided laptop, the eighth-grader is tuning into lessons every day from the apartment about topics like the Boston Tea Party.

Meanwhile, Mojica and Navarrette both got good news on the job front. Mojica was promoted to a supervisor position at Party City. And though Navarrette had loved his job at Lime, in early December he started a higher-paying position as a materials handler at Cepheid, a COVID-19 test manufacturer.

When he drives to work every day and passes by homeless encampments on the streets, it sends a chill down his spine. “Knowing what we’ve been through, I never want to go back to that again,” he said.

But as content as they are right now, the family has bigger ambitions. Eventually, they want to upgrade to a bigger apartment, so that Serenity can have her own bedroom. Navarrette wants to go into business and open his own barber shop. Serenity, too, hopes to become a hairstylist.

“We’re still striving for more,” he said. “I know I’m meant to do greater things, not just settle.”

Read the full article at: https://www.sfchronicle.com/bayarea/article/After-COVID-19-layoff-months-of-homelessness-15834945.php